Let’s face it, most of us are not great at saving money. In fact, a survey done by GoBankingRates (a personal finance website) of over 7,000 Americans found that 69% of respondents had less than $1,000 in savings. Additionally, the St. Louis Federal Reserve, which publishes the personal savings rates of Americans monthly, showed the savings rate for January 2017 was only 5.5%. In the 1950’s and 1960’s, however, the savings rate for Americans was nearly double that at around 10%.

Sure, there may be lots of reasons why we aren’t able to save as much as past generations. It could also be that we’ve been misinformed about what it takes to get ahead.

Here is a look at the 3 biggest lies you’ve likely been told about saving money and what you should be doing instead:

1) Your daily latte habit is making you poor.

If you spend $5 a day on coffee 5 days a week, you’ll blow $1,300 a year. That’s definitely a nice chunk of change that could boost your savings account, but there are two major budget-busting expenses that cost Americans nearly 50% of their paychecks.

According to a 2015 report from the Bureau of Labor Statistics, married couples spent over 31% of their income on housing and 17% on transportation. Not everyone lives this way. The Atlantic published an article titled “America’s Weird, Enduring Love Affair With Cars and Houses,” and here’s how the spending habits of Americans compared to other countries: 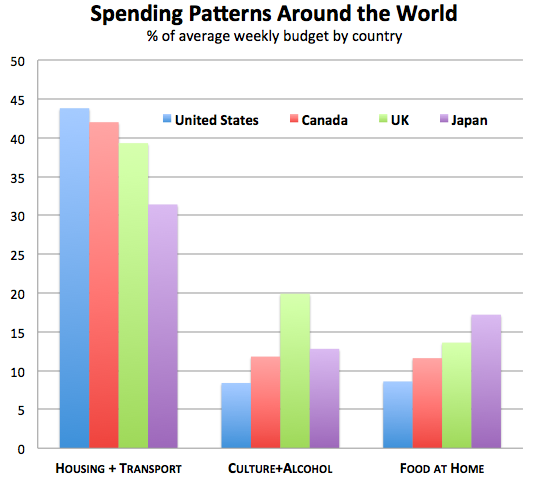 How much of your budget is taken up by your house and car payment? These aren’t two expenses that can be dropped overnight, but you should consider your options. Once you’ve paid off the car you’re driving, keep it until you’ve owned it at least 10 years. When you do replace it, be realistic about how a new monthly payment will impact your finances, and consider buying used.

If you’re renting, consider a roommate or moving to a smaller more affordable place once your lease expires. If you’re paying a mortgage, you could look into refinancing, subletting a room, or selling it to buy something more affordable especially if your house is worth more than you paid for it.

There’s probably a good reason why many financial articles are quick to point out how your coffee habit is impacting your budget. Coffee is a fairly easy expense to drop. It’s much harder to drop / lower your housing and transportation costs. That doesn’t mean with some research and creativity that it can’t be done.

Reducing these two expenses could add a significant amount to your monthly budget giving you room to save and sip your latte guilt free!

2) You shouldn’t start saving for the future until you’ve paid off all your debt.

It’s true that paying interest on credit cards and other loans can be a waste of money especially if the interest rates are high, but does that mean you shouldn’t save anything until you’re debt free?

There are at least two scenarios where you should consider saving even if you have debt. The first is in a retirement account such as a 401k that offers employer matching. For example, if you contribute 3% of your salary to your 401k and your employer matches that contribution by putting in another 3%, you’ve just doubled your money and are now saving 6% of your salary!

It’s free money that you shouldn’t pass up. You can start small with even 1% of your earnings. 1% of a $50,000 annual salary, for example, comes out to about $19 a paycheck if you’re paid every two weeks. If your employer matches that 1%, you’ll have saved $38 a paycheck. It’s a small start, but it’s definitely money you will be grateful for in the future.

The other reason why you shouldn’t put off saving for retirement is because it may take you years to become debt free, and by then you’ll have missed out on all the years your money could have grown by being invested.

The second scenario in which it might makes sense to save before you’ve paid off all your debt is when you’re building an emergency fund. Having a small emergency fund can help you break the debt cycle. If you’re putting any extra money you have into paying off credit cards and your car breaks down or you get sick, how will you cover these unexpected expenses?

It’s likely you’ll end up pulling out your credit card and building up the balance you worked so hard to pay. Setting aside just $500 to $1,000 can make a huge difference in helping you cover many emergencies without incurring more debt. To get started, consider setting up an automatic transfer to your savings account of just $25 a month. If you get an annual bonus or a tax refund, use that money to start your emergency fund.

You don’t want to store more than a small amount in a low interest savings account when you’re paying high interest debt, but having a little cushion can be a big help!

3) If you haven’t been saving at least 10% of your income, you’re already too far behind!

Reading about how to get ahead and save for the future can be depressing. This is mostly because financial experts tend to set the bar pretty high. There was an article recently on TheStreet.com titled “You’ll Need $2 Million Before You Can Think of Retirement.”

Saving $2 million dollars probably seems like a scary and impossible goal for many Americans. There are other experts who will tell you that you have to be saving at least 10% of your income to have a secure future. So what will happen to the millions of people who haven’t saved anything for retirement?

If that describes you, don’t let these numbers keep you up at night or worse make you avoid saving altogether because you’d rather deal with it later. You should start by contributing whatever amount you can afford to your retirement account. Anytime your income increases or your expenses decrease, up the amount of your contributions. If you get an annual raise or a promotion, put the extra or at least half of the extra into savings. Do the same when you pay off a bill.

You can’t change your past money choices, but you can focus on your financial future, and make saving a priority now. Your future self will thank you!